Salhouse Broad is located on the River Bure between Wroxham and Horning, in the heart of the Norfolk Broads. There is woodland, reedbed and grassland accessible to visitors. Salhouse Broad is part of the Broads Executive Area and also lies within Salhouse Conservation Area.

Salhouse is unique among the Broads both because of its origins, and its mosaic of habitats. It is commonly known that the Broads originated with medieval peat diggings, which flooded as sea levels rose and transformed into the network of rivers, wetlands and lakes we see today. Salhouse Broad, however, was not excavated for peat, but for another important resource of the time: gravel, probably deposited by the glaciers which extended to Norfolk during the last ice age. Now, Salhouse Broad has excellent examples of mature dry woodland, wet woodland (alder carr), gorse scrub, open fen and reedbed, and open water, and draws a range of beautiful wildlife to its banks.

People visit Salhouse Broad for its beautiful landscape and wildlife, its rural character, and the laid-back, relaxed atmosphere for which the area is renowned. It is a special place rich in personality and distinctiveness, wildlife, history and heritage. It is an ideal place to walk the dog, hunting for the elusive swallowtail butterfly, or just relax and leave the modern world, with all its stresses, behind.

The site is managed by the Salhouse Broad Ranger team alongside the landowner, as a sustainable business. We know the importance of protecting the Broad’s past, whilst also meeting the needs and challenges of the future. Management therefore focuses on maintaining and improving the visitor facilities at Salhouse Broad, whilst retaining its value for wildlife, heritage and community. To that end, income generated by the Broad goes back into the upkeep, maintenance, conservation and improvements to access of Salhouse Broad.

We are constantly learning more and more about Salhouse Broad, gaining new photos brought in by locals and visitors alike. We are fascinated by the history of our work place, so strive to piece this puzzle together. If you have any old photos or memories that you would like to share, please get in touch.
8000BC - The Broads are based on alluvial deposits of peat and silt laid down around 10,000 years ago.

900s - The site was dug by hand for sand and gravel. Today, we can see the sandy beach is a result of this extraction.  Joyce Lambert, a young botanist in the 1950's, deduced that the Norfolk Broads were not created naturally, but instead were man made. This finding transformed our understanding of the Broads today and our knowledge of the economy of the area in the middle ages. Joyce conducted her own research, whereby she made a selection of close space borings through the silt to the underlying peat in a variety of locations within the Broads, upon which she realised that the watercourses were mostly basin shaped with vertical, rather than sloping slides, highlighting they were dug out by man. This realisation was initially received skeptically at Joyce's presentation to the Norfolk and Norwich Naturalists Society in 1952, as it was understandably puzzling as to how such extensive excavations could have been dug by hand within areas of the floodplain, that are now subject to regular inundation.

14th Century (Middle ages) - The pits gradually flooded with water from a local river, which made it increasingly hard to dig for resources on the site. The flooding formed the unique network that is now the Broads. Joyce and her colleagues attributed the flooding partly to a deterioration in the climate of East Anglia, and partly to sea level rises. At this time, the Broads were used for commercial transport, with wherries carrying cargo of farm produce, coal, beer, bricks, timber and even ice. River trade- bringing in raw materials and exporting finished goods, helped to make Norwich England's second city. It wasn't until the road network became dominant that the Broads siezed to act be used for commercial transportation.

Interesting fact: Wherry men were not adverse to a little smuggling. In one famous case, a wherry man was sentenced to four years hard labour and the confiscation of his craft due to smuggling. However, his friends were quicker than the law and took the wherry and sunk it in a broad. When the owner came out of prison, they raised it to find the cargo still intact!

Mid 17th Century - The big Oak tree , which sits in prime place on the Hill overlooking the Broad, began its life.
Early 1900s - first part of the Broad bought (as far as one could walk into the Broad, up to the knee) by the Cator family. At this point, the waters of the Broad would have been much cleaner than today, with many more waterlillies, reeds and other large water plants along the banks. Since then, with more people living around the area and using the Broad, and more intensive farming practices occurring in close proximity to the Broad, the waters have become more nutrient rich, in particular with phosphates and nitrates.

Second World War - Salhouse Broad was a popular destination during the second world war. As the beaches along the coast were closed and protected against invasion, people had to look for alternative places to relax during the Summer months. At this time, the sandy beach ran the whole length of the left hand bank (before being replaced by quay heading to allow more boats to moor up).

1953 - A short film made on the subject of a tour of the Norfolk Broads, particularly Salhouse, from the perspective of a young boy writing a letter.

2003 - Lease expires and Salhouse Broad is run in-house until the present day.  ​

The old wreck which lies at the mouth to the Old Wherry Cut, and is gradually dying away, is thought to have been a Submarine Chaser, or Gun Boat in World War One. It is likely that is was a Motor Launch order from the USA and built by the Canadians, delivered between 1915-1916 in the batch ML1-550. In all there were 580 motor launches (ML), also known as Mosquitoes.

After World War One, the ML was bought privately by a local character known as 'The Major', and used as a pleasure craft. For many years she was enjoyed by her owner on these waterways. From the video we can see that in 1953 that it still had the name Water Witch written on the bow.

At the start of World War Two the boat, along with others, was requisitioned by the Ministery of Defence and moored on Salhouse Broad with arrangements of posts and wires to deter German seaplanes and spies from landing. Following the Second World War, any similar boats that were in good enough condition, were taken to boat yards for repairs. Water Witch was not so lucky and remains on Salhouse Broad today. 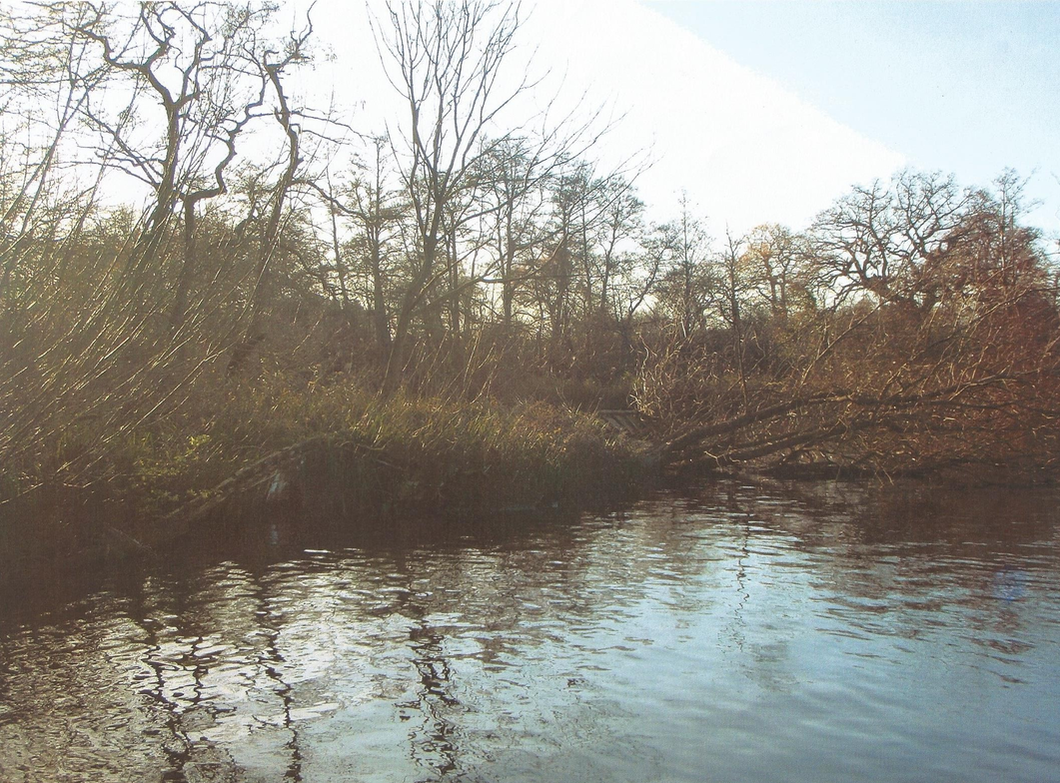 The wreck is now overgrown with reed and saplings. Work is being planned to cut back the foliage to allow us to see the beautiful gun boat once more.

Maps through the ages